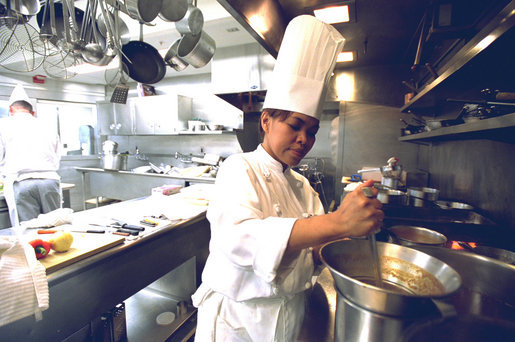 Chef Cristeta "Cris" Comerford prepares a meal inside the White House kitchen in this July 17, 2002 photo. Mrs. Laura Bush announced on August 14, 2005 that Comerford has been named the White House Executive Chef. Comerford is the first woman to serve in the job. White House Photo by Tina Hager

NORTHFIELD, MN — In last week’s ceremony, the LDC was awarded a Michelin star for its service during Accepted Students Days. A Michelin star is one of the most highly regarded awards in the culinary world, and is bestowed upon only the best restaurants.

Head Chef Josh Appleton remarked that he was immensely proud to be recognized for his creativity. “When Bon Appetit hired me, they charged me with the task of revitalizing the LDC. I think my signature cauliflower pineapple pesto pizza best represents my efforts at doing that.”

When asked about his future goals, he responded, “I would love for the LDC to have its own episode on Chef’s Table.”

In a statement, Michelin representative Pièrre Guilliame Félix dos Santos said, “The LDC has shown that it can craft delicious meals for the 24 hours that accepted high school students visit Carleton and decide whether or not to pay $250,000 over the next four years.”

They then forcibly removed the Michelin star from a wall that said “Embrace Imperfection,” set the award on fire, and left.